Drone That Carries Humans with No Pilot!

A drone that carries humans and is fully autonomous, has been developed by a company called “Ehang” in China. It’s Called the Ehang 184. This looks like something from the future and is quite amazing.  It’s currently only a prototype but  should be available soon. 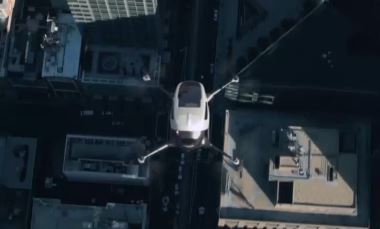 The drone resembles a small helicopter; accept it has four propellers, one on each corner.  It can be controlled by an on-board computer and told to take the passenger anywhere by simply entering in where you want to go, with the on-board computer.

The craft only sits one person, but can get around pretty fast, with a top speed of 65 mph and it runs entirely off electricity.  Here’s the biggest difference between this and a helicopter; you are not the pilot,as with a helicopter, but in the Ehang 184 you are the passenger!  The computer is the pilot and it takes you where you want to go.

You can plot out your route on the on-board screen, which looks similar to an iPad, but it’s a bit bigger.  It doesn’t even need anyone at the remote controls, because it’s pre-programmed.  One downside, that I can see, is that it can only fly for a maximum of 23 minutes, so make sure you don’t take it too far, but it does recharge in only 25 minutes.

One great safety feature includes backup functions for the propellers, so if one malfunctions the other is able to bring the drone to a safe landing.  The inventor claims that several of their employees have already been in it and have flown in it.  Its’ going to have a price tag over $200,000, so it’s currently only for the rich, but let’s hope it comes down in price and the range increases a bit.

According to Ehang; the main thing about this drone, which is better than a helicopter is that it is easier to find a parking spot and it requires no pilot.  It can land in a width of around 2 parking lot spaces.

Unfortunately, it’s not yet available to the public, as it has to get past various testing phases and FAA authorization.