In our previous showcase, we have published beautiful inspiring iPhone app websites and also an article about  Useful tools for Android developers. Today, we have collected some inspiring websites example designed for Android apps.

END_OF_DOCUMENT_TOKEN_TO_BE_REPLACED

Android is the world’s most popular mobile platform. It has supports from the huge mobile phone manufacturers HTC, Samsung and Sony Ericsson etc. It’s an open source platform having more than 600,000 available apps which makes it more popular among users. With the popularity of Android platform, apps popularity also increased which attracted web developers. END_OF_DOCUMENT_TOKEN_TO_BE_REPLACED

If you look at your website analytics data, you will probably find that a large portion of your viewers are using mobile devices. For this blog, only 13% of my viewers are using a mobile device, but should I consider creating a mobile version of my template to cater to them? Mobile versions have many advantages, but there are too many disadvantages for me to want to create one for my blogs.

The reason that I don’t use a mobile theme on my blogs is because of the lack of customization. If you buy the pro version of WP Touch or Handheld from Elegant Themes, you can customize the colors, but that’s about it. If I were to create a mobile site, I would want it to look exactly as my desktop version does. I have experimented with both WP Touch and Handheld and neither plugins work very well for me. I need something that simply shrinks your blog down to the mobile size, such as the WordPress theme Twenty Eleven. 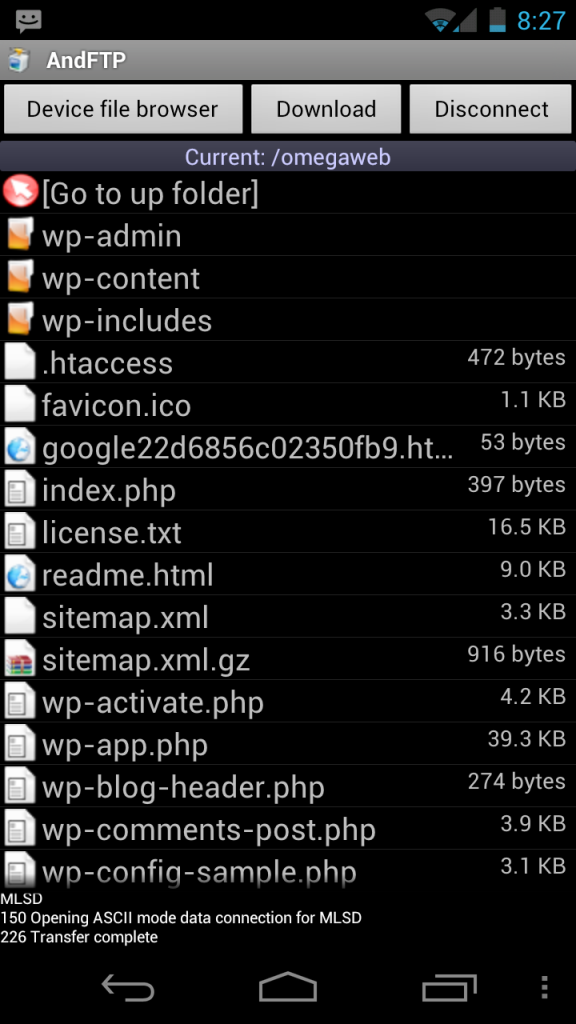 When I had a website listed on the Flippa Marketplace, I figured out that I had it listed as a domain name only instead of an entire site. This was almost 24 hours into the listing and I wasn’t even home at the time to do anything about it… As anyone familiar with Flippa knows, it’s quite expensive to list a website on there and you have to pay upfront, no matter if your website sells or not. I was trying to use Chrome for Android to change my listing from a domain only sale to an entire website, but to do that requires uploading a .txt file to your server via FTP… And that’s when I discovered AndFTP.

I desperately needed an FTP client for Android, so I opened up the Google Play store, searched for “ftp client,” and then downloaded the first one I saw. After downloading AndFTP, connecting to my server was a breeze and all of my files loaded quickly. I could easily navigate to the correct folder, browse the files on my phone, and upload the correct .txt file that I downloaded from Flippa… All over Verizon’s 4G LTE network.

If you have ever used FileZilla before, AndFTP will seem very familiar. It has the same layout with the file names all in one giant list. The user interface could be a little cleaner and easier to navigate, but it gets the job done and it does it in a very short amount of time. After my catastrophe with Flippa, I have used AndFTP on numerous occasions and it works just perfectly every time. I like the fact that I can carry my entire FTP server wherever I go. If I want to share a font I have uploaded on my portfolio website, I can use AndFTP to download it to my phone, then email it to my friend faster than I could download it from my website itself.

AndFTP is developed by Lysesoft is available on the Google Play store. There is a “Pro” version of this app, but this review was for the free edition.