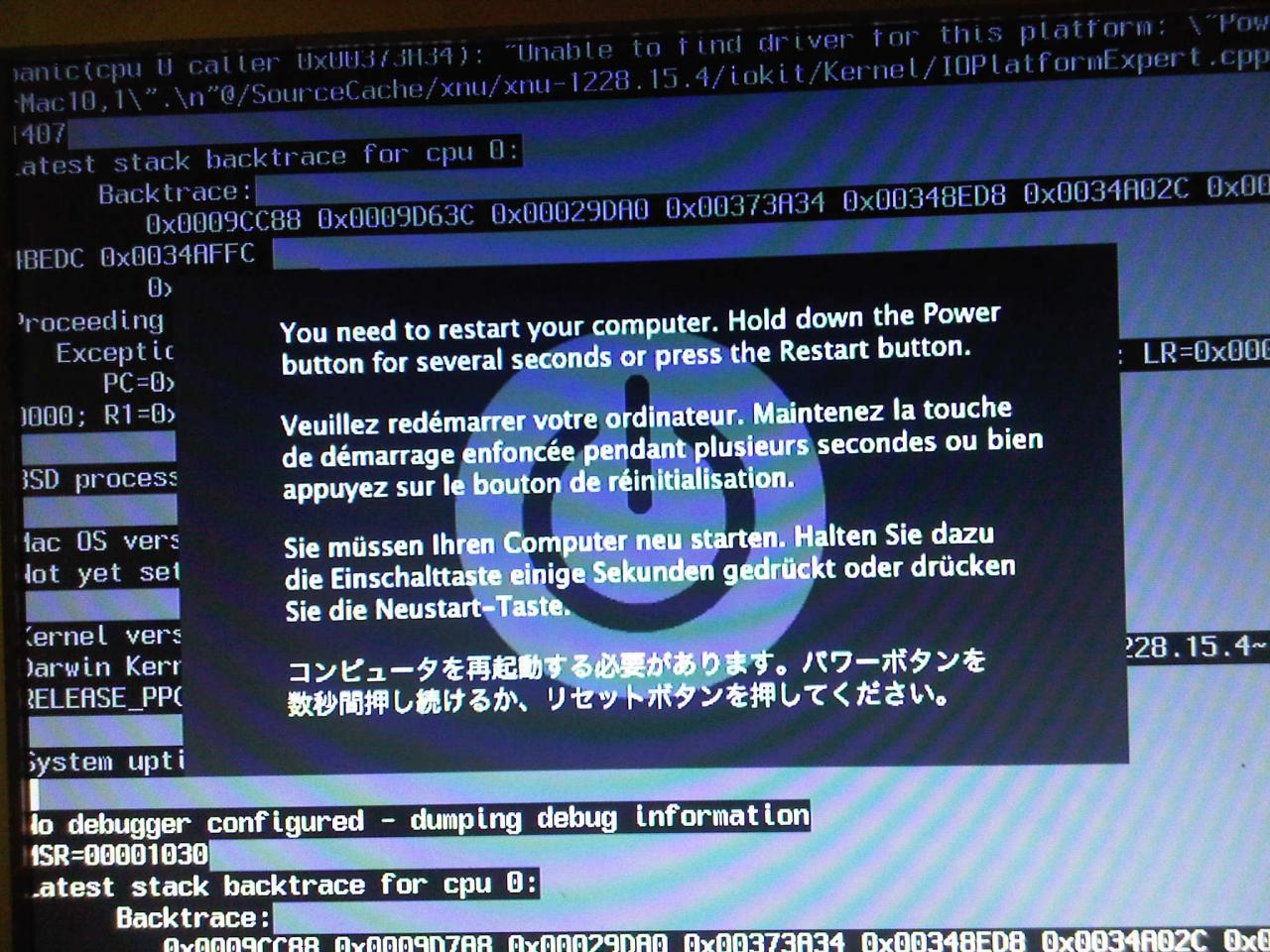 On July 25th, two days ago, Apple released OS X Mountain Lion for Mac users to upgrade to. The download was over 4GB and took a good three hours to download because of the amount of people trying to access the file at one time. After it downloaded and installed, I thought that was it. I went to start up my MacBook Pro and I got a kernel panic message immediately after the white screen with the Apple logo.

What Is a Kernel Panic?

If you are familiar with the Blue Screen of Death on Windows, a kernel panic is the Mac equivalent. It’s the rarest, most fatal software corruption that can happen on the Mac operating system and is almost incurable without causing permanent damage. Kernel panics can be caused by anything from third-party software such as Adobe Photoshop, to operating system failures, as in my case.

What Did I Do About It?

When I first saw the message, I had no idea what it meant. I was not familiar with kernel panics, I had no idea how to explain what was occurring to the Apple support reps, and I had absolutely no idea as to go about fixing it. I knew one thing for sure, though – my computer wasn’t running OS X Mountain Lion properly.

I researched the problem on the Internet for about three hours and eventually figured out it was called a kernel panic. I found that there are numerous ways to cure a kernel panic, including resetting the PRAM, fixing errors using Disk Utility, and booting into Mountain Lion’s Safe Mode and reinstalling the OS… None of this worked. I worked on simple fixes like these for about 10 hours on July 25th until I finally went to sleep at 3:00 AM.

On the next morning, I knew I had one option left. I had been avoiding it this whole time, but I knew it was time to run a factory reset. I thought I knew how to perform a factory reset without having to insert my Snow Leopard DVDs, then upgrading to Mountain Lion again, but I called the Apple Support again just to make sure. I booted into Safe Mode by holding the Shift key and pressing the power button. Because Mac’s Safe Mode hardly allows anything, including the use of USB ports, backing up my files was a pain. It was a good thing I had Dropbox installed because I needed 96% of my available 2GB to back up everything. All of my applications and other large files can be reinstalled and ported over from my iMac later.

To reset a Lion or Mountain Lion machine to factory settings without using a restore DVD or flash drive, simply hold Command + R and press the power button to boot into Recovery Mode. Once in Recovery Mode, I launched Disk Utility and erased everything on my Macintosh HD. I then backed out of Disk Utility and reinstalled Mountain Lion from scratch. It took another three hours to download and 30 minutes to install, but it booted up like a brand new machine – no files, no applications beyond the default set, and no settings, but I had a working Mac again.

It took a little while to put all my files back where they belong, adjust my settings the way I like, and reinstall the third-party apps that I used to have, but it’s all here again.

What Did Mountain Lion Cost Me?

In the end, Mountain Lion cost me $20 to download it, two calls to Apple Support, ten hours of attempting to fix the kernel panic, five hours to back everything up and completely reinstall Mountain Lion, and now I’m two days behind on everything. My blogs haven’t been updated in at least two days, I have a client website that I should’ve started on 24 hours ago, and I have programming assignments due that should’ve been submitted to my online class days ago. Was it worth it? Not exactly, but you’ll never see me running an old operating system… I was determined to update.

What Did I Learn?

First off, I learned what a kernel panic is and what it feels like to almost lose a computer due to a system failure. Secondly, I learned the importance of buying (and setting up) an external hard drive to use for Time Machine Backups. Reinstalling applications, replacing files, and duplicating settings is a huge headache. And lastly, I learned that I am a bigger idiot than I once thought – I went through all of this for a couple new features and the ability to say I’m running OS X 10.8.

What Do I Think Of Mountain Lion?

Honestly, I haven’t even had time to play with some of Mountain Lion’s new features. I really like the pop-up notifications for things like email so I don’t have to open my email app to preview the message. I also like minor UI tweaks such as the new dock, Safari loading bar, and a few other things. I will hopefully have more time to play with Mountain Lion after I install it on my iMac as well. I just hope that computer doesn’t kernel panic too.

Should You Be Worried About Updating?

After all of my headaches, I have to say you shouldn’t be worried about updating to Mountain Lion. Kernel panics are extremely rare and it seems as if I’m the only person in the world that got one from updating to OS X 10.8 (not exaggerating). Even if your computer does go into a kernel panic, I just outlined exactly what to do, so it should only take you about three hours to fix. Just remember to back up your files and applications first!

18 Responses to Upgrading To OS X Mountain Lion Caused Me a Kernel Panic, 15 Hours Of Pain